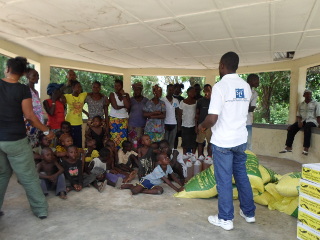 Last year I went back to my bush village and that of a Peace Corps friend in Salone. We’d been volunteers there in the seventies. I brought along some old black and white pics Guy’d taken. I had no idea the impact they’d have. When I pulled them from my pack, it created a gentle mob scene, with people crowding around, pointing and carefully passing the photos around. Some cried. What I hadn’t realized was that when rebels attacked villages during the war and people ran into the bush, the rebels torched the roofs. Once the roofs were gone, the houses simply melted. People lost everything, including their pictures.. Those pictures I brought them showed parents and grandparents they hadn’t seen in twenty years. When I left the second village, the chief thanked me for bringing back their memories.

I’d like to start a FoSL Memory Project. The idea is simple. If you have pictures from your Peace Corps service before the war (pre-1994) please contact me. People were particularly interested in those pictures which showed people, rather than cultural events, artifacts or landscapes. Villages and small towns are likely more doable than large towns, since so much has changed. (Kenema is ten times as large as it was.) You and I will arrange for me to get copies (hard and electronic.) I will then arrange to get those back to the relevant villages. I’m not quite sure how I’ll do that yet. I may take them back myself or I may get my friend and the interpreter on my recent trip to take them. Either way, I’ll foot the bill at least for the pilot program.

I’d like to start with a dozen or so villages, just for proof of concept. Ideally, I’d like to hear from you in the next thirty days, with an eye toward sending some back with Peggy when she goes at the end of the year.

We gave years of our lives to help the people of Sierra Leone, which was very hard. Now we have an easy way to make another difference in people’s lives.

Thanks.
Sam
Please email me directly, sam.hill@fticonsulting.com. Please put Memory Project in the subject line so it doesn’t end up in spam.
Thank you.